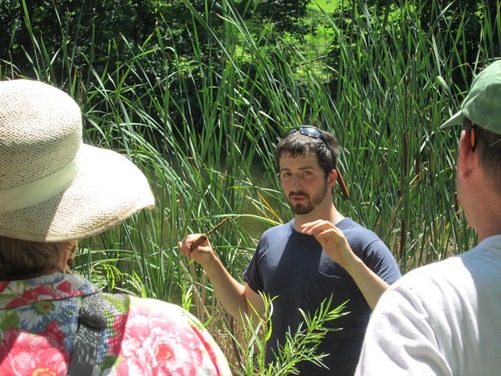 At the Minnehaha Creek in Minneapolis, Gil Schwartz discusses using cattails for food during a workshop on wild edibles.
While Seasonally Sourced Foods (SSF) is a relatively new business, in some ways it has been many years in incubation.

At a young age, founder, Gil Schwartz tromped around urban Minneapolis and rural Germany, plucking, digging up, and enjoying wild grapes and strawberries, cattails and dandelion, and participating in inspiring demonstrations on turning acorns into bread and maple sap into syrup. Over the years his interest in wild foods became a passion, broadening out to include many other amazing wild plants, edible mushrooms, culinary insects, and game animals. With countless hours harvesting and experimenting in the kitchen with these foods, Gil enjoys eating wild on a near-daily basis and sharing these edibles as often as possible.

Having moved to Ashland, WI, in spring of 2013 to be closer to Lake Superior and the great outdoors, Gil experienced some success that summer selling juneberries and other wild foods locally and became aware of the public's eagerness to try these often overlooked and underappreciated foods. 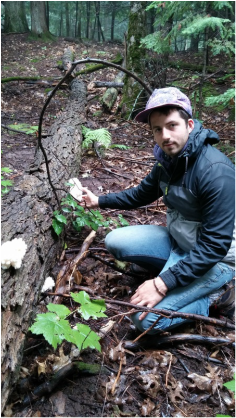 A delicious discovery of lion's mane mushrooms near Lake Superior
Threats to the this mostly pristine environment in the Northwoods were mounting that year as a multinational mine intent on extracting iron taconite from the sacred and ecologically sensitive Penokee Hills mountains, as well and a proposed 26,000-hog factory farm along the Fish Creek, both slated to be downwind of Ashland and in the Lake Superior watershed. Inspiration from the local resistance to these proposed projects, as well as calls for new and creative, economic alternatives and for locals added further fuel to the inception of Seasonally Sourced Foods.

With a clear desire in the local market for professionally harvested wild edibles and unique locally grown produce, plus a thirst in the community for more education about these foods, Gil knew the time was right to start Seasonally Sourced Foods. After months of research and planning SSF was registered as an LLC in early 2015.

It has been exciting to showcase the perennial abundance of the region and we look forward to moving into the future with many more harvests.
Copyright ©2015-2022 Seasonally Sourced Foods LLC. All rights reserved || PO Box 172, Ashland, WI 54806 || info@seasonallysourced.com